'If you don't do as you're supposed to, you get something else altogether.  As I'm rather into the organic method with butterfly impulse on the side, the finished results are just what they are.'

So says the astoundingly creative author of the wonderful blog 'theinfill', which if you haven't already done so, I'd urge you to visit.

I can't begin to tell you how much those two simple sentences resonates with me.  At this point I  have to be honest and say that for a long time and for some inexplicable reason I've been somewhat frightened of doing things 'incorrectly,' with the coaching inn.  As if there's an absolute right and wrong way of approaching it's construction.  Of course the kit is put together in a uniform way to achieve the basic shell of the building, but everything else is really just down to personal interpretation.   I have no clue why it's taken me so long to work that out, but I have to say how incredibly liberating it feels now that I've done so!

An example of my shiny new liberated way of thinking for instance, is that the coaching inn kit has flights of stairs in both the left and the right hand side of the building - to my mind this takes up rather a lot of space which could be put to better use.  Previously I would have put the staircases in both sides because 'that's how it was supposed to be,' but it would have meant that I'd have had to compromise an idea for one part of the building that I've been mulling over in my head for a few weeks now.  Namely that I really, really, really (yes, really!) want to include a banqueting hall in the right hand side of the house which brings me to my second act of wanton rebellion.....I've decided not to include one partition wall, turning what originally 'was meant to be' two small rooms, into one longer one. Go me!

And then there's the actual 'do I want it to be an inn at all?' and 'should I keep it entirely tudor?' argument which has battled away in my brain for what seems like an eternity.  I rather think the answer's going to probably end up being 'no' to the first scenario and possibly not to the second, as the structure evolves and takes on an identity of it's own.....in much the same way a lot of our older houses here have over the years.

All this navel gazing and fear of not following the rules meant that I was on the verge of throwing in the towel and giving up on the project entirely, but armed with my new found insight I decided to give it one last go and I can't begin to tell you how glad I now am that I did.....especially in this unprecedented time of self isolation. I can honestly say, that the escapism this is offering me right now is helping me cope enormously with the challenges we are all currently facing.

Anyway.......I first decided to move the structure off of the dining room table and into my craft room upstairs, which was a major task in itself as the thing weighs a ton!  Having got it upstairs I then set about painting the whole thing inside and out with a thin coat of gesso, which gave it more of a uniform look; 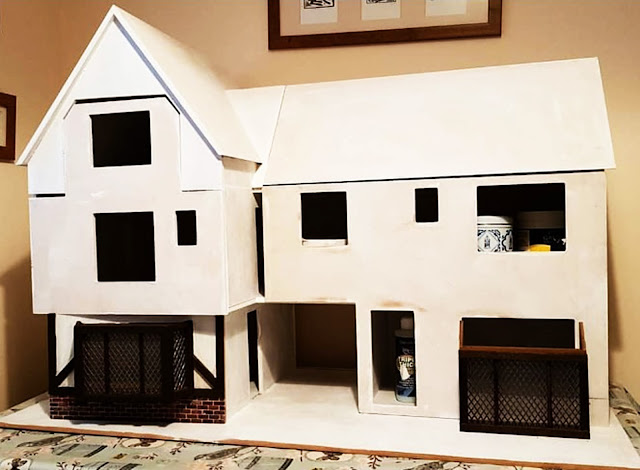 In the photo above, the front wasn't actually hinged, nor the windows fitted...rather everything was just propped up to give me an idea how things were progressing.

Next I decided to grout all the brickwork around the front and the side of the house, which proved quite awkward! It's easy enough to get things straight when you're gluing brick slips onto pieces of wood or mdf lying flat on the table, but when you're doing it on an upright wall they have a habit of tilting or sliding down, which made getting even courses of brickwork something of a challenge. I noticed after I grouted that a couple of them weren't very level, but there's nothing a bit of strategically placed foliage won't hide!  At this point I also decided that I wouldn't make the brickwork all the same level around the building, which I think makes for a more interesting and haphazard look.  Easier not to have to match up everything exactly too....why make more work for yourself when you don't have to? 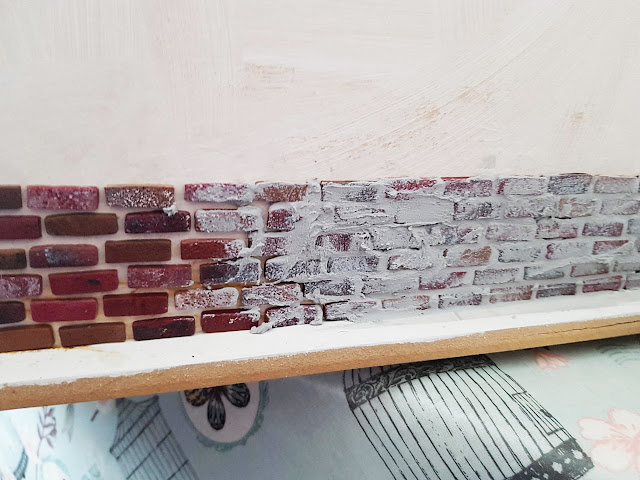 And so onto the beam work. I'd decided early on that I didn't want any of them to be too uniform or look too perfect which was just as well as I rapidly discovered it's near impossible to replicate things perfectly when you're doing everything by hand and judging things by eye.  As you can possibly see, things got stuck on, which I then changed my mind about on more than one occasion, but I'm pretty happy with how things are looking at the front right now; 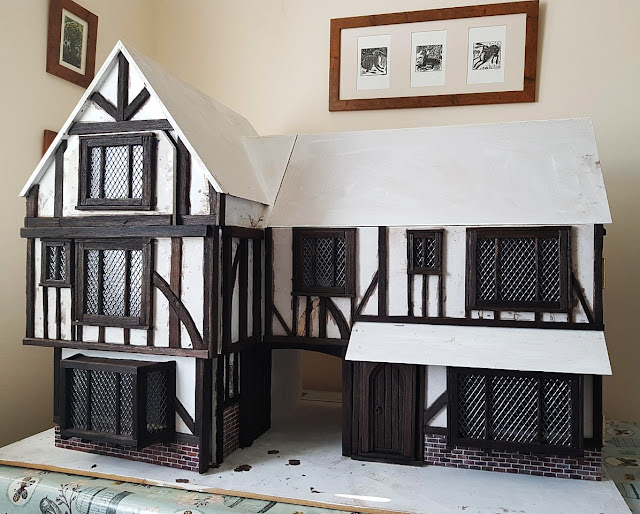 The doors (one down the alley as well as at the front) I made out of balsa wood as I didn't like the  ones sent with the kit and they'll probably end up with an ornate side hinge at the bottom when I eventually get around to making or purchasing them.  Unfortunately the doors don't open very far but I'm not overly bothered by that at the moment (it'll probably annoy the sweet bejesus out of me later on though!).

I'm not entirely happy with the beams I've created at the right hand side of the house.  I wish now, that I'd maybe just left all of them running vertically and horizontally rather than include the bottom inverted 'V' shape, but as they're all stuck down now and I'm rapidly running out of balsa wood to make more, they'll have to remain as they are; 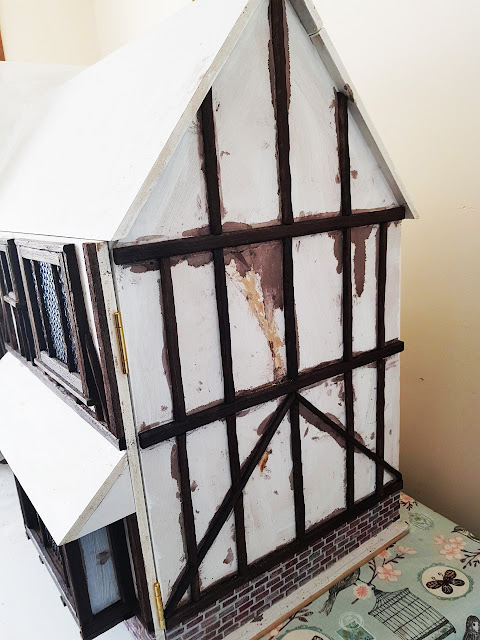 I'm happier with the chimney side though.......I think; 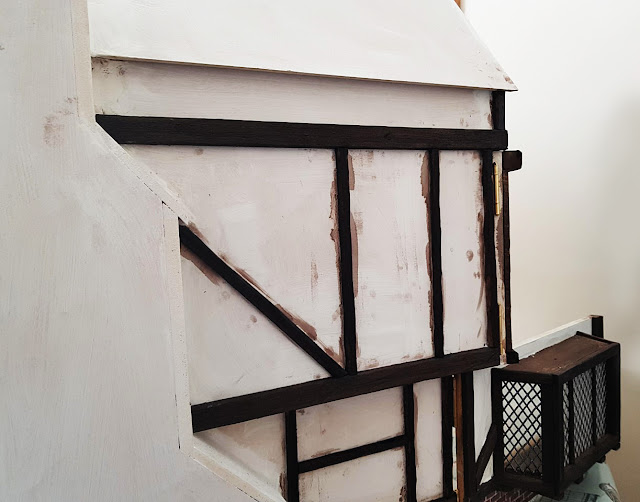 And that really is about as far as I've got on the exterior of the house since I last wrote in November.  Where does the time go?  I did have a dabble at creating a carpet for one of the rooms inside using some fabulous CTR punch needles I purchased from the US via Etsy.  I downloaded a free vector image of a heraldic lion I found on the net; 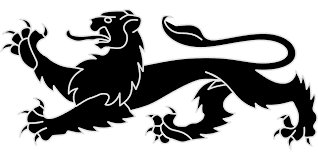 then using a lightbox, I traced it onto some monks fabric and used lots of embroidery floss that I inherited from my grandmother, to create this; 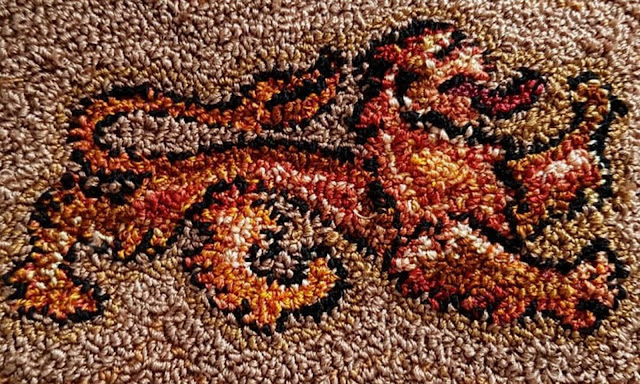 which was a fun diversion.  Unfortunately in this instance, I used a six strand punch needle which I think has made it a bit thicker than I originally intended, but as I have a three and a one strand punch needle also I might experiment a bit more and see how that turns out. After all, it's not as though I don't have much time on my hands at the moment!  Always a silver lining......

As a footnote, if anyone reads this and is interested in following my progress further, I set up an instagram page a while back which I tend to use more regularly than this blog.  It can be found here;

I know just how it feels to be stuck and almost abandon a project, but just by giving inspiration time to find you again you have made incredible progress! It's looking wonderful, and there are no rules. A mini project is for you to discover YOU and all of the ideas you let yourself run with. Just have fun with it and don't "should" all over yourself! The rug is wonderful and it's totally normal to have to make something two or three times while you learn what works and what you like best. Hope you're staying well!