A Little Bit of This and That

I've had a week or two away from doing anything miniature.  No particular reason other than it's been horribly hot and humid in my part of the world which has found me disinclined to faff around much. My work table is beneath a south facing window so it sometimes feels like I'm working in a bit of a greenhouse when the sun hits our garden. The last couple of days however have been a little cooler so I decided to press on and build the chimneys, one of which is absolutely huge;

and make a start on one of the bow windows which will be situated on the ground floor. I'm not a great fan of the acetate which came with the kit - it's very thin and in a couple of places the printed lattice pattern looks to have rubbed off, so I decided to use it as a template and originally bought some lead effect paint, which proved to be both messy and unconvincing.  Searching on the internet I came across a couple of tutorials which then convinced me to bite the bullet and purchase some 2mm lead strip tape in an antique finish, and also some 1mm acetate, strong enough to take the weight of the lead strips. 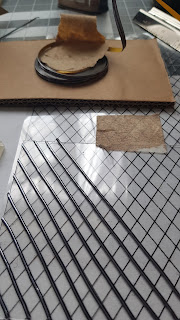 Fortunately the lead strips have a self adhesive backing which enabled me to lay them directly onto the acetate without making too much of a mess, but it's almost impossible to get a completely straight line with them as the lead is so soft and bendy.  That doesn't really matter though as the Inn is a tudor design and the slight waves kind of add to it's charm. 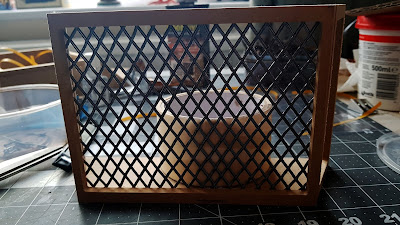 The photo above isn't that great but you get an idea of how it's all beginning to take shape. I'm toying with the idea of either using some Triple Thick brush on gloss, some clear nail varnish, or some Mod Podge gloss over the top of the windows, which will hopefully secure the lead further to the acetate and create more of an old tudor glass effect.  I watched a video over on YouTube which used Triple Thick and the effect was really convincing.  I'm not entirely sure how easy it is to get that in the UK yet though.

Progress on the rest of the house has been somewhat hampered by one of my cats taking up almost permanent residence there lately. 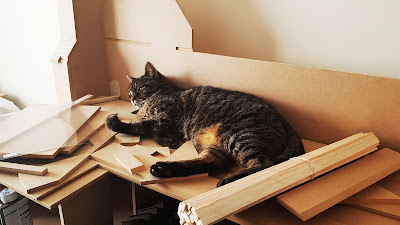 A couple of weeks ago he brought home a baby bird which he proudly presented to me in our living room.  Fortunately he's an old cat and has had some of his teeth removed so the bird was unharmed and I was able to return it outside to it's very frantic mother, who ever since has dive bombed both myself and our cat each time we set foot outside the back door.  The cat has now taken to hiding in the dolls house whenever Mama blackbird starts making a racket outside - which is almost all of the time at the moment as her brood starts to leave the nest.  I'm seriously considering drawing up a rental agreement for him soon! 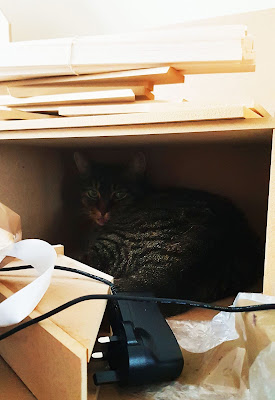